The Overdub meets up-and-coming rapper Joash Brian at his home in London. 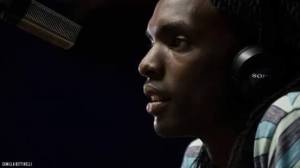 In the London borough of Harrow, behind an unassuming house, people are making music – and they’re making it in a tool shed. The back garden shack looks like the type of sturdy lean-to where someone might hang their shovels or stash Christmas decorations, but beyond the shabby wooden walls is a laboratory of hip hop beats. This is Joash Brian’s second home. His actual home is five meters away.

“My brother and I built it ourselves about a year ago,” says Joash. He points to a square outline of bricks that surround the studio and says that they had originally built it much bigger but the borough had them it take down because of building regulations.

In the cramped darkness of the studio, Joash pens lyrics to a new song while his brother/producer, Herman, expertly spins and twists knobs on a sound board creating massive beats with deep warbling basslines that drown out the death rattle of the ancient space heater in the corner. They bob their heads in unison as Joash scribbles in a tiny notebook, his black braids hanging like a curtain obscuring his face. The brothers work together fluidly, talking in half-finished thoughts that the other understands.

“Having my brother in the studio, well, that’s someone who really gets me… it’s good to work with him because the feedback between me and him is really good. We don’t hold back anything.”

Soon producers and musicians arrive, filing into the already confined hut. Though hours go by, nobody leaves, and the studio begins to feel like a warm, thumping clown car. These musical creative types seem to gravitate to Joash’s studio. Along with a professional set up, he has the enviable quality of radiating capability and is somewhat of a Swiss Army knife when it comes to production skills.

“When I’m not writing or recording, I’m directing videos or editing video, so it’s pretty much constant, constant production. I’m always around the music, that’s all I do really. I go to sleep at five in the morning and wake up at eleven, back on the scene. It’s music, music, music.”

Joash’s multi-skill set comes from the winding road he’s taken to get to this point. Though he studied to be a cartoon animator, he found himself at the United Nations in Rome editing videos about agriculture. He says he owes his path so far to his multi-nationality.

In a world filled with tens of thousands of aspiring wanna-be rappers, Joash maybe be the only Italian speaking British Kenyan. Even his dreams are cross cultural.

“I keep dreaming that I’m in Italy at my aunt’s restaurant,” says Joash. “But every time I dream of this place, it changes. Like, I know that I’m in the same place but the hotel is always different. I kind of find that hilarious.”

It’s reasonable to chalk up his strange dislocated dreams to jet lag, having just returned from Dubai where he shot a video for his newest song. Now he can add music videos on two different continents to his list of what sets him apart. The video is for a single that will appear on his upcoming project.

“Right now we have the Wonderland mixtape coming out. It’s really almost done and I’m finally happy about that… We’ve got a lot of features and collaborations, so you will be seeing a lot of me this year.”

For some reason there is an exorbitant amount of talent surrounding bands with the word deer in their name. We decided to make a list featuring the top 5.

No surprises here. Halcyon Digest is one of the most important albums of the last 10 years.

Distinct. That’s the word that gets tossed around a lot when describing Deerhoof, and for good reason. Deerhoof have been around since the late 90’s and as a result have an impressive catalog that can seem impenetrable to a new listener. Pick up 2005’s The Runners Four, arguably their most accessible album, and start there.

This Oklahoma-based band came out of nowhere in 2010 and dropped back-to-back stellar EPs and then fell off the face of the earth. On March 6th DEERPEOPLE posted on their facebook page that there might be a new album in the works. Fingers crossed.

Criminally overlooked folk rock band Deer Tick have been making quality Fourth of July barbecuing music since 2007. They get surprisingly  little love in a genre that’s experienced a lively revival in recent years.

Though they only have four songs, all of them are bangers. Shortly after releasing their demo in 2014, this four piece girl band from Madrid was forced to change their name due to legal reasons.